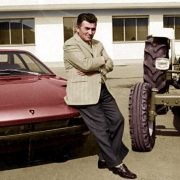 Marketing according to Ferruccio Lamborghini. The importance of customer service (video interview)

@henrymance Diplomatic immunity apparently protects also against covid though, look at them... All immune from diplomacy

Facebook business pages: how to bypass paid advertising to get more likes and...

July 2013: goodbye Altavista and Google Reader
I use cookies to make sure you can have the best experience on our site. If you continue to use this site I will assume that you are happy with it.OK
Scroll to top